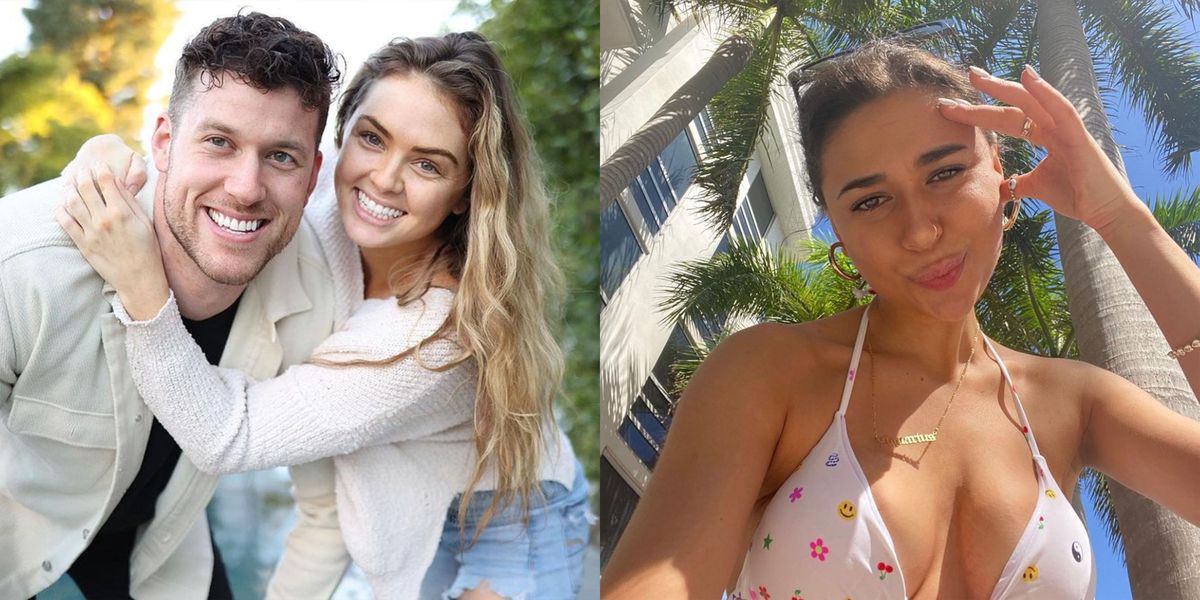 So, while you were minding your own business/mindlessly binging Netflix this weekend, former Bachelor (and probably forever mess) Clayton Echard was publicly accused of cheating on Susie Evans on TikTok.

The cheating claims were both from and about a TikToker named Sasha Narang, who posted a video detailing the alleged tryst on, you guessed it, TikTok. “um so i think i just ended the bachelor’s marriage last night (i had no idea) (wtf),” she captioned the video, which you can watch yourself below in all of its tea-soaked, popcorn-chomping glory:

Sasha’s version of events, if you prefer a recap, is basically that she and Clayton met in a bar in New York City (the location is vitally important later in the story, so log that detail away) on Friday night and, after flirting for a bit, he revealed that he had recently been on The Bachelor (an entire television franchise with which Sasha has only the most passing familiarity, btw) and it wasn’t until a post-hookup Google search that she realized he was the most recent lead/in a committed relationship.

“He was very, like, sneaky, meaning he was very adamant about being quiet. Right when it was time for me to go he made it very clear I couldn’t stay over,” she claimed in the video before explaining that she proceeded to DM Susie with an immediate confession/rundown of events.

“I DMed her. I told her everything. I was very transparent because I felt incredibly terrible. I never wanted to be caught in the middle of this,” Sasha says in the video, before explaining that she also sent Susie the only evidence she has of the hookup—a picture of the Uber order with Alleged Clayton’s address. Really, it can’t be said better than Sasha says it herself (complete with her incredible explanation for why she didn’t take a selfie with Alleged Clayton):

“The only evidence that I have—I didn’t take any photos with him. I’m actually banned from Snapchat, and that would have been the only way to have like a selfie. But, I took a photo of Uber that he called for me, so it has the address. And I sent it to [Susie] when I was like, I don’t know if it’s a hotel or an Airbnb. Ideally, it’s his apartment, so maybe she recognizes it. But if not, regardless, she can easily find out where he stayed and that’s your proof. So yeah, I just ended the Bachelor’s marriage, I think, and it’s not my fault. It’s his fault. What the hell is wrong with men?”

Now, as you might have guessed from the liberal used of words like “allegedly” and “claims,” Clayton has another, very different version of events. While Sasha says they met at a bar (at 2 a.m.—also important) in New York City and had a hookup after which he acted super sus, Clayton says they…never met. And were in fact separated by hundreds of miles and multiple time zones.

According to Clayton, Sasha’s story is just not possible because he was clear across the country in Arizona that night, just getting his gym on and being a faithful partner to Susie. Annnnd to back up his version of events, Clayton hopped on his Instagram Stories with receipts, in the form of his phone’s geolocation record of where he was on Friday night (which was a gym in Arizona).

“I can’t believe I’m addressing this. This is ridiculous, but let’s just make this as easy as possible,” he said in a video in which he straight up walked the internet through the Significant Locations tab on his iPhone.

“People that make these false accusations should be held accountable,” he captioned the post. “Trying to gain clout by ruining a relationship is embarrassing and extremely immature.”

Let’s take a little breather because we are NOT done yet and there’s already been a lot to process. Take a deep breath, pop some more popcorn, whatever you have to do. Ready? Okay, diving back in.

Bachelor Nation (in IG comments and on Reddit, where this story dominated the r/thebachelor board) pretty quickly seemed convinced by Clayton’s evidence, but Sasha didn’t concede anything. In fact, she went the complete opposite direction and doubled down in a DM conversation with Clayton, which he took a screenshot of and shared on his Story.

In that DM, Clayton breaks down how it would be mathematically impossible for him to have hooked up with her in NYC at 2 a.m. EST based on the proof he has that he was in Arizona as of around 8 p.m. MST that night (and don’t worry, he covers the time zone conversions, so no need to go A Beautiful Mind trying to sync the times in the story).

Another deep breath because there is STILL MORE to this saga. Sasha mentioned at the end of her original TikTok video that several people had told her to take her story to Reality Steve, which she apparently did because she revealed in an Instagram comment thread update that she had already talked to him and he basically predicted the backlash she received from the fandom.

In Sasha’s Instagram comment update(which Redditors quickly captured for posterity), she also somehow simultaneously (kind of) walked back her claims and doubled down on them:

In the hours since the bulk of drama went down, Bachelor Nation has gone full conspiracy theory mode, penning hot takes on the situation (and speculation about Sasha’s intentions), wild/hyperbolic theories to explain the situation (like Clayton is secretly an Animorph), and more grounded (but also more disturbing) theories that Sasha isn’t lying, but was basically IRL catfished by Clayton lookalike who is actively using his resemblance to the former Bachelor to pick up women.

We’ll have to keep watching this story to see what other evidence Sasha digs up/if Reality Steve wades into the fray/if Susie ever directly addresses the whole thing, but for now, let’s just take a moment to marvel at the fact that, after everything that went down on Clayton’s season of The Bachelor, a TikTok-fueled infidelity scandal is what has somehow united Bachelor Nation in his corner. ¯\_(ツ)_/¯