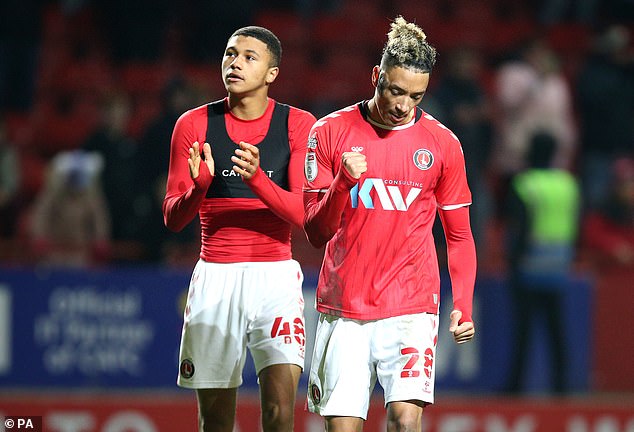 By Jacob Ranson For Mailonline

Chelsea are looking to capture the signature of hot prospect Mason Burstow from League One side Charlton Athletic before the transfer window slams shut, but will have to make an improved offer.

The Blues made a ‘substantial bid’ for the 18-year-old with two offers reportedly being made to the Addicks, but both failing to meet the Addicks valuation of the youngster.

Burstow has netted six times in 14 appearances in all competitions for Charlton, which has seen him attract interest from a number of clubs, including Chelsea and Brentford.

Burstow was left out of Charlton’s squad for Monday’s game against Portsmouth, with manager Johnnie Jackson confirming: ‘A bid has come in from a Premier League club for Mason, so we’ve allowed him to go and chat with them.

‘As far as I know nothing has been sort of done as yet, but obviously his focus was going to be elsewhere tonight, so we felt it best to let him go and have discussions and leave him out of the game.’

Burstow’s last outing for the Addicks was in the EFL Trophy defeat to Hartlepool last week, in which he scored.

He also netted with his first ever touch in professional football after coming on as a substitute in a 6-1 win over Crawley Town in August.

Charlton owner Thomas Sandgaard has already confirmed that a number of Premier League clubs are interested in signing Burstow.

‘We have got multiple Premier League teams who are fishing to see if they can do a quick deal when it comes to Burstow,’ Sandgaard told the South London Press.

‘We’ll see what happens. I don’t think any of them have come up to the price level that I’m expecting, considering his talent. We’re just sitting tight.

‘In contrast to the past, we can sit back and wait to see if the price is right instead of panicking and selling on the last day of the window. That is not happening any more.

‘There is a right value for a very talented player like Mason Burstow.

‘We’ll see what happens. If it doesn’t happen now then maybe it will happen in the next year or two.’