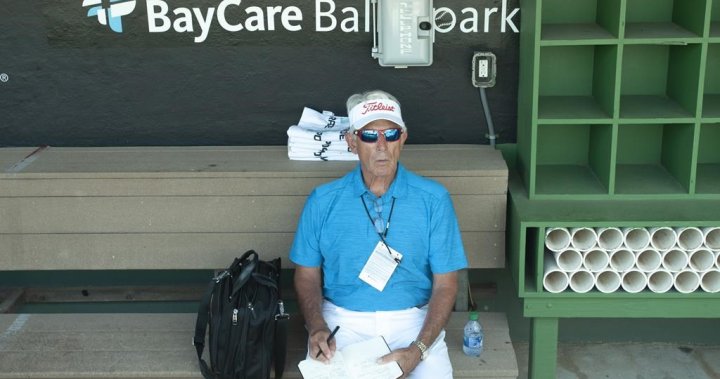 TORONTO – An impromptu receiving line formed by home plate at Rogers Centre as members of the Toronto Blue Jays gathered to welcome back Buck Martinez.

Outfielder Raimel Tapia, interim manager John Schneider and other members of the team staff were eager to greet the veteran Blue Jays broadcaster. Martinez, 73, stepped away from the job in mid-April after being diagnosed with cancer.

He has since completed his treatment for the disease and returned to the booth Tuesday night as Toronto hosted the National League’s St. Louis Cardinals.

“We were all hoping this day would come this year, but we had to wait and see how his treatment was going, and how he was feeling,” said Dan Shulman, Martinez’s broadcast partner for Tuesday’s game, standing nearby as Martinez shook hands with several Blue Jays players.

4:18
Jays Care Foundation campaign aims to get more kids on the diamond

“It’s awesome. He’s been in Toronto as part of the franchise for the better part of 40 years so it’s great to see him back.”

Between the top and the bottom of the second inning the Blue Jays paid tribute to Martinez. Toronto’s relief pitchers came out of the bullpen and the lineup came out of the dugout, all tipping their caps to him in the broadcast booth on Rogers Centre’s 300 level behind home plate.

Martinez was shown on the ballpark’s big screen, saluting the crowd and putting his hand to his heart to show his appreciation. The camera also flashed to several fan-made signs welcoming Martinez back and his family was shown in their seats.

His ties to the Blue Jays date back to 1981 when he started a six-year stint as one of the team’s catchers. Martinez played 17 years in Major League Baseball, including stops with the Kansas City Royals and Milwaukee Brewers.

He was hired as Blue Jays’ manager in 2001, but was fired midway through his second season after compiling a 100-115 record.

Martinez first stepped behind the microphone in 1987 as a colour commentator for Jays games on TSN. Shulman noted that when he first became a broadcaster in 1995 he was paired with Martinez.

“That’s the guy who taught me everything,” said Shulman, gesturing toward Martinez. “I think for us it’ll be like riding a bike once we get up there and start doing it again. We’ve done it so many times together.

Shulman said Martinez watched every game as he recovered. Shulman added that after every game Martinez would text him and fellow broadcaster Pat Tabler his thoughts on how the Blue Jays played.

This report by The Canadian Press was first published July 26, 2022