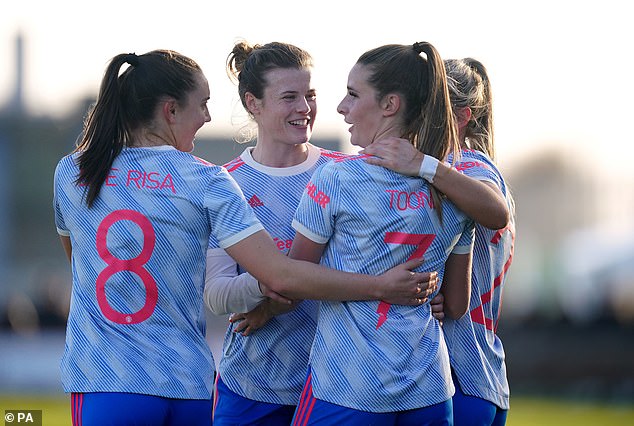 Bridgwater 0-2 Manchester United: Charlotte Buxton puts through her own net and Ella Toone is on target to help Marc Skinner’s side through to the fifth round of the FA Cup

By Kathryn Batte For The Daily Mail

There is a new chapter in the Solskjaer history book at Manchester United after 19-year-old Karna, daughter of Ole, made her debut for the women’s team in the fourth round of the FA Cup.

The former United boss and his wife were in the stands here at Fairfax Park to watch Marc Skinner’s side defeat third-tier Bridgwater, with Karna (right) coming on as an 87th-minute substitute.

A striker like her father, Karna’s goalscoring form for United’s Under 21s was rewarded with a place in the first-team squad.

Charlotte Buxton scored an own goal, before Ella Toone (pictured) secured the victory

There was no debut goal for the youngster, but she will no doubt be given more opportunities in the future.

‘It wasn’t a token for Karna, it was a deserved one,’ Skinner said of her debut. ‘Obviously she’s got a famous Dad but she wants to be famous in her own right.

‘We were privileged to have Ole as our manager, as well as a wonderful player for this club, but again it stops becoming about Ole as much and more about Karna.

Ole Gunnar Solskjaer’s daughter Karna, 17, made her debut coming on in the 85th minute

As expected, United started on the front foot and despite some impressive goalkeeping from Beth Howard, found the opener when Charlotte Buxton turned Ivana Fuso’s cross into her own net.

Howard continued to thwart United’s attempts on goal, with the goalkeeper making a string of impressive second-half saves.

But Ella Toone finally beat her in the 82nd minute as she curled a shot into the far right corner.