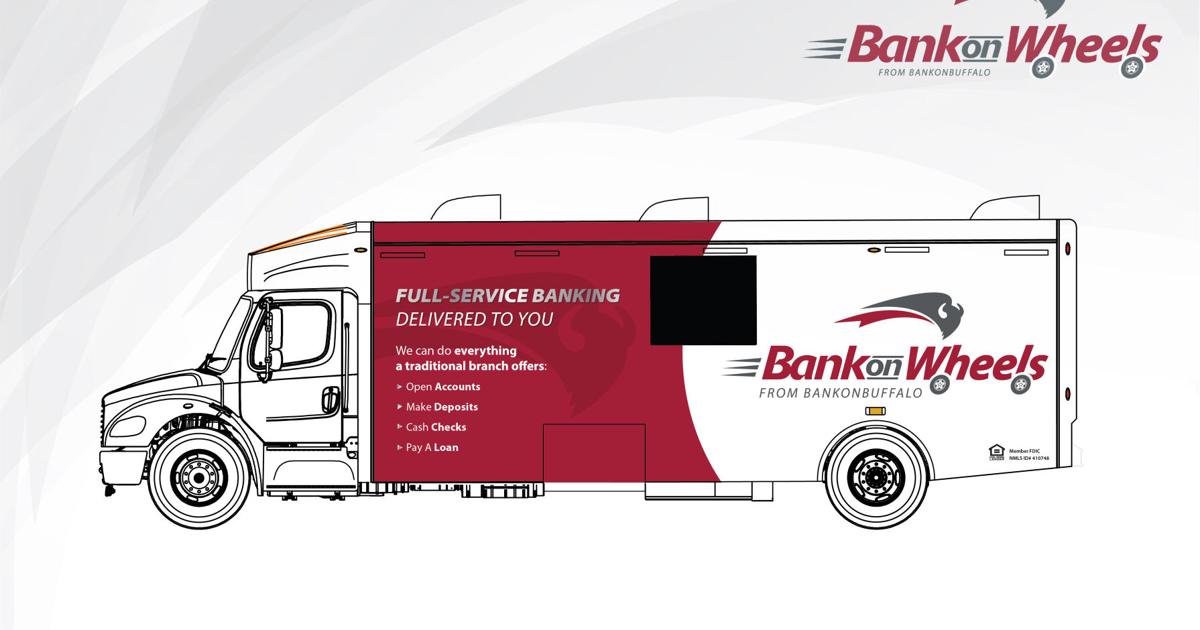 Bank on Buffalo is taking an innovative tack, spending over $500,000 to create a mobile branch that will visit certain locations on a regular schedule.

The 34-foot-long “Bank on Wheels,” offers the same services as a brick-and-mortar branch, including a walk-up ATM and two exterior teller windows. The interior includes a lobby, a teller window and an office for private conversations with an employee.

“It’s almost like an RV-type of a structure, but it will be a full-service bank on top of a set of wheels,” said Martin Griffith, chief of community banking for Bank on Buffalo’s parent, CNB Financial.

The bank hopes to put the vehicle into service just after Labor Day, once regulators give it the green light.

Bank on Buffalo has chosen three locations where the vehicle will make weekly visits: the Renovation Church at 567 Hertel Ave. in West Hertel neighborhood; the Peter Machnica Community Center at 1799 Clinton St. in Kaisertown; and the Doris Jones Community Resource Center at 3001 Ninth Street in Niagara Falls. Bank officials say they chose locations that were underserved by other financial institutions.

Griffith said the idea for a branch on wheels grew out of conversations Bank on Buffalo officials had with community leaders a few years ago, about how the bank could make its services more widely available.

“In a lot of cases, I kept hearing that there was concern that brick and mortar wasn’t the answer, because of transportation issues and people not having necessary transportation to even get to a bank,” Griffith said.

Plans for a mobile branch, capable of going to multiple locations, were put in motion. But supply chain issues delayed the process of the vehicle getting built.

The bank was finally able to acquire a Freightliner diesel chassis, which would typically be for a delivery truck. A fabrication company in Indiana custom built the bank on wheels. It’s now at CNB’s headquarters in Clearfield, Pa., undergoing final preparations.

In addition to its regular stops, Bank on Buffalo will be able to bring its vehicle to events to promote financial literacy, said Michael Noah, Bank on Buffalo’s president.

Griffith said Bank on Buffalo has been working with a firm to ensure the mobile branch will have good security for customers and employees alike when it’s parked somewhere.

The bank expects to expand the number of places the bank on wheels visits, but wants to start out with a few locations to gather input, Noah said. He and Darnell Haywood, the bank’s community responsibility officer, researched potential locations before settling on the first three.

“This was just a starting point for us,” Noah said.

Meanwhile, Bank on Buffalo’s network of brick-and-mortar branches continues to grow. It has 12 now, and plans to open a 13th early next year in Lancaster. Bank officials are scouting sites for yet another location.

KeyBank brought its “KeyBus,” a retrofitted transit bus, to the Buffalo area in June for a series of appearances. Key’s bus offers some features of a branch and has on-board computers for financial literacy programs and job hunting, and is traveling to other regions the bank serves.