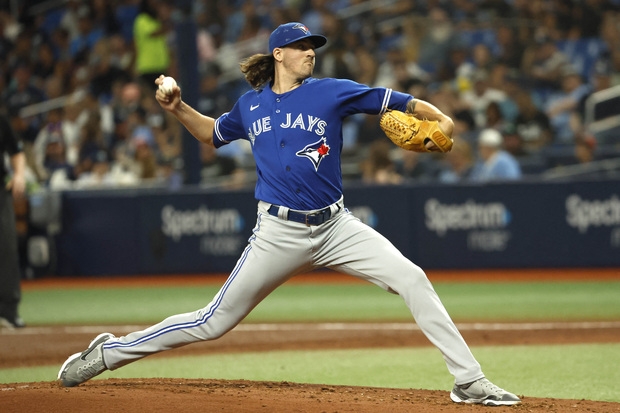 ST. PETERSBURG, Fla. — There was one Blue Jay who was dealing his best on baseball’s trade deadline day.

That would be Toronto starter Kevin Gausman, who had his strongest outing in this his first year with the team and led the Jays to a big win in the opener of a meandering nine-game road trip.

The crafty right-hander struck out 10 and allowed just one hit in his eight innings of work as Toronto eked out a 3-1 victory over the Rays at Tropicana Field.

It was a brilliant outing for Gausman, who allowed a walk and hit a batter in the first inning and then didn’t allow a base runner until the Rays’ Taylor Walls led off the sixth with a single.

“He was locating his heater. He was nasty,” interim manager John Schneider said. “When he puts that in the zone with his split, he’s really, really tough to hit. He was basically dominant tonight.”

That he was, with an effort reminiscent of some of his starts earlier in the year. Still humming along late in the game — his final pitch of the seventh was a 97-mph fastball — it was a massively encouraging effort for the Louisiana native.

“I just felt like I could put the ball where I wanted to,” Gausman said. “Delivery wise, I feel like I was in rhythm. When (it’s going like that) I can be hard on teams. I matched up pretty well against a lot of (the Rays hitters.)”

The competitor that he is, Gausman was well aware of the no-no possibilities — especially the way his stuff was playing.

“You definitely know,” said Gausman, who spun his longest scoreless outing since Aug. 21, 2018. “It just goes to show you how hard it is to do at the major league level.”

Making his 20th start of the season, Gausman rebounded nicely from his previous start, an outing he wasn’t pleased with after allowing a season-high five earned runs.

But the 31-year-old was money on Tuesday as the Jays began the post-deadline phase of their season with a win at a venue that often gives them fits.

For the first eight innings, the lone run of the game came on a one-out single by Bo Bichette that drove home Vlad Guerrero Jr. With the win, the surging Jays have won 11 of their previous 13, are 58-45 overall and a tidy 12-3 under Schneider.

With the victory, the Jays moved four games clear of the Rays, their closest pursuers in the AL wild-card race. They’re also 13 games over .500 for the first time this season.

And it was a nice start to the nine-game roadie that includes a matinee here on Wednesday before shifting to Minneapolis for four games against the Twins and a three-pack against the resurgent Orioles in Baltimore next week.

Though the bats were held in check by the tough Rays pitching — led by starter Drew Rasmussen — they managed to add a pair of runs in the ninth on a two-out, Danny Jansen single.

That set the table for Jays closer Jordan Romano to record his AL-best and career-high 25th save of the season, though the Markham, Ont., native was thankful for those insurance runs as Walls led off the frame with a solo homer.

Springer was held out of Tuesday’s starting lineup — a regular occurrence these days — as the team looks to help the 32-year-old ride through the rough patch.

“He didn’t look comfortable for sure (on Saturday at the Rogers Centre) and that’s why we were careful with him on Sunday,” Schneider said. “We hope it isn’t anything crazy where it’s going to hinder his performance and us,. But we’ll know more (on Wednesday.)”

Springer was in noticeable discomfort after a couple of missed swings on Saturday. Publicly, the Jays aren’t concerned the undisclosed ailment is serious, however.

“We’re not overly concerned,” general manager Ross Atkins said on Tuesday. “We just want to make sure that he’s not pushing too hard and that he’s honest with himself.

“George is an exceptionally driven individual with a very high pain tolerance. We are not overly concerned and very confident we can manage it.”

With the incoming arms on Tuesday, the Jays needed a couple of transactions to make room. For the first, they designated Anthony Banda for assignment and later dealt Jeremy Beasley to the Pirates for cash considerations … Jays closer Romano is looking forward to the addition of another Canadian in the bullpen and has actually worked out with Brampton’s Zach Pop in the past with the Ontario Blue Jays in Mississauga. In fact, the two Canucks attended a Buffalo Bills game together. “He’s a good dude and his stuff is nasty,” Romano said … In moving Jordan Groshans in the deal with the Marlins to acquire Pop and Anthony Bass, the Jays have now dealt three of their past four first-round draft picks — Gunnar Hoglund (2021) who went to the A’s in the Matt Chapman deal this spring, Austin Martin (2021) who went to Minnesota in the Jose Berrios deal last summer and Groshans.