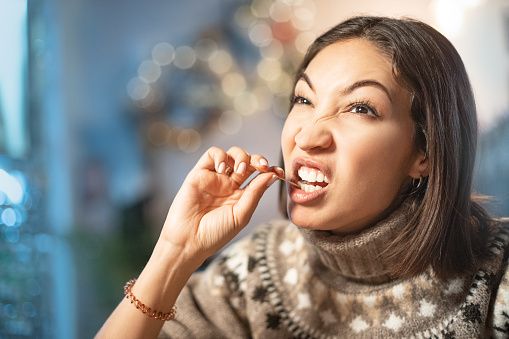 Dear Asking For a Friend,

I find it disgusting when people use a toothpick to clean their teeth, especially during a meal. What are the etiquette rules around this, and isn’t it bad for your teeth, anyway?

Miss Manners would hasten to scold anyone who uses a toothpick at the table to clean their teeth. “Etiquette occupies the high ground, as it is generally conceded that picking the teeth is vulgar,”

Excuse yourself and go to the washroom instead to attend to any food bits stuck between your teeth.

That said, toothpick prodding in public has not always been condemned as unsavoury behaviour. There are artifacts that suggest the opposite, like gold toothpicks and small silver boxes with lids that were used to hold toothpicks on the formal dinner table for the wealthy set as a finish to a good meal. (Just check the

for all sorts of mid-century vintage toothpick holders for the common household, from pressed glass dishes to ceramic animal figurines.)

Hollywood has its own take on toothpick culture with stars like James Dean and Steve McQueen exuding cool charm while chewing on a toothpick. And luxury toothpicks have made somewhat of a comeback with companies like

in Toronto that sells toothpicks made from American milled northern white birch that come in flavours like bourbon, single malt and mint. For some, it’s a fashion accessory with utility.