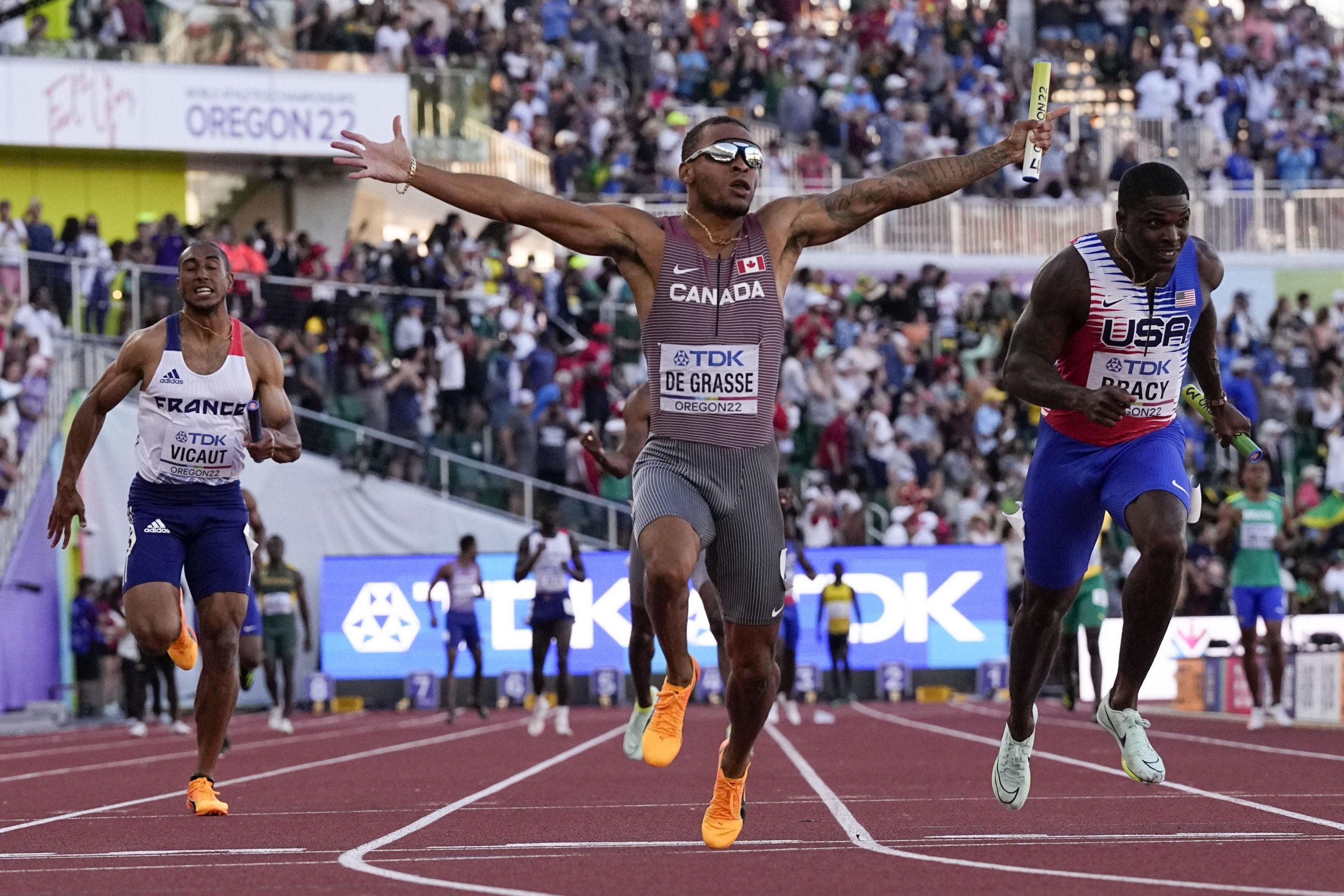 EUGENE, Ore. — Andre De Grasse made quite the return to the track after his withdrawal from the worlds 200-metre event — a very golden one at that.

Anchoring a team with Aaron Brown, Jerome Blake and Brendon Rodney, the Canadians set a national record and world-leading time of 37.48 seconds en route to gold in the men’s 4x100m relay at the world track and field championships on Saturday.

“(This is) all we talked about — (us) actually having a great shot at being on top of the podium,” De Grasse said.

“This year, I think with a lot of us being more fresh — myself, running like six races and then Brendon coming in for the relay, I think that also helped us. Just being able to practise the relay more and being able to go out there and have that team chemistry.”

The gold was Canada’s third medal of the world championships.

De Grasse, lined up side-by-side with American Marvin Bracy, the silver medallist from the 100m, when receiving their batons, put his stamp on the final with his signature closing speed.

The Markham, Ont., native contracted COVID-19 just a month back and did not qualify for the 100m final before pulling his name out of the 200m competition.

It seemed to do wonders for the 27-year-old, along with what felt like a home crowd cheering the team on.

“It’s special. There’s a lot of Canadian flags out there, a lot of fans cheering us on — it definitely feels good. It’s not technically on home soil but it kind of felt like it.”

De Grasse wasn’t the only one to have been dealing with the effects of COVID-19.

Athletics Canada coach Glenroy Gilbert had to coach the team through Zoom having contracted the virus himself recently.

Despite all that’s happened, continuity and team chemistry has become the name of the game for the Canadian squad.

“We’ve run together at the Olympics last year — we have the same team. This year, with our head coach going down â¦ It was one of those things where we trust ourselves and open the marks up a little bit and give us some wiggle room to work with,” Blake said.

The victory also comes after some near misses by Canada’s team.

Canada earned silver at last summer’s Tokyo Olympics and bronze in Rio in 2016, plus bronze at the 2015 worlds in Beijing. Canada didn’t make the final at the last worlds in 2019 in Doha.

Led by Donovan Bailey, Canada won 4×100 gold at the 1995 and 1997 world championships. That team included Gilbert himself.

The Edmonton native earned his first world championship medal with a bronze on Saturday. For the 23-year-old, ranked fourth in the world, it was a full circle moment.

“This will hold a special place in my heart. First world championship medal — it all comes full circle,” Arop said. “Starting from Doha world champs and making the final, not placing top three and not making the Olympic final.

Arop is just the second Canadian male to medal in the race at worlds. Gary Reed won silver in 2007 in Osaka, Japan.

Finishing eighth at the world indoor championships in March, Arop began gaining momentum by winning the Canadian national championships, then running the third-fastest time in the world this season (1:43.61) three weeks ago at the Pre World Invitational Championships.

The bronze medal-effort did not come without a scare, as Arop had to hold off surging fourth-place finisher Emmanuel Wonyonyi of Kenya.

“Relief that I didn’t get caught at the line. I mean, I got caught, but I’m happy that I came out with the medal.”

Arop, who ran 1:44.28, started out the race steadily before getting tied up with Wonyonyi early in the race.

“Part of me was just thinking, ‘relax, stay calm. You could still get back.”’

And that he did. Arop took the lead around the 200-metre mark and managed to hold onto it for much of the way.

“I knew if I didn’t get out in 23 seconds, I’d have something left for the finish,” he said.

“Once I took the lead, I knew I had to make a move early otherwise Korir and Sedjati were gonna come. I knew they could close hard. I made sure I made that move early (and) take some people out of the race.

As the final bend came, Korir started to make his push, as Arop looked to be slowing down in the final 100 metres.

After losing the lead with about 50 metres remaining, Arop was caught by Sedjati with the finish line just a few metres away.

Arop looks forward to next year’s world championships where he feels he could do even better.

“Once I’ve done something, I feel like I could do it again,” he said. “I know next year’s going to be even better and bigger and I think the goal will remain the same.”

Meanwhile, Damian Warner’s quest for a world decathlon title is over.

The 32-year-old from London, Ont., suffered an apparent hamstring injury about 120 metres into the 400 on Saturday, the final event of Day 1.

“I’m not sure yet. I have to go back and see,” Warner said. “I felt my hamstring pull a couple times. I was in lane one so it felt like it was pretty tight and I was trying to stay in my lane. As soon as I came off, it felt like something went and I just couldn’t continue.”

Canada’s Olympic champion was the leader through the first four events of the day.

Pierce Lepage of Whitby, Ont., was second after Day 1 on Saturday, with 4,485 points. Ayden Owens-Delerme of Puerto Rico moved into the lead after Warner’s injury.

Warner has never won world decathlon gold. He has a silver and two bronze.

At last summer’s Tokyo Olympics, Warner shattered his Canadian record and became one of just four decathletes in history to top the 9,000-point barrier.