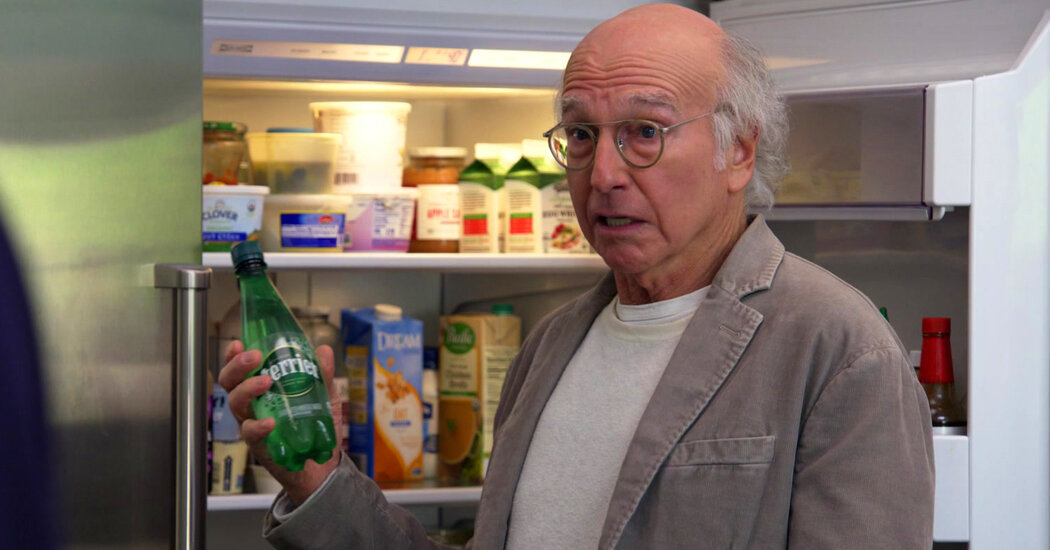 As consumers skip ads and streaming content balloons, brands aim to be everywhere all at once.

Refrigerators aren’t movie stars, but they can pose a particular problem when they have a cameo onscreen. When Larry David casually opens the door in “Curb Your Enthusiasm,” those shelves need to be full of food and drink, and each one of those items is likely to have a brand: Perrier sparkling water, Pacific chicken broth, Clover cottage cheese. Maybe there will even be a box of Cheerios on top of it, as in a recent episode of “Euphoria.” The fridge itself will have a brand, too, of course. All of this must usually be negotiated through carefully considered placements that give these products their 15 seconds (or less) of fame.

Product placement has long been a feature of Hollywood. Seeking a boost in brand recognition and association with cool characters, alcohol and car companies, especially, have for decades paid or engaged in a kind of quid pro quo to get their products into films. The first documented example was in 1896, when the Lumière brothers, often credited as the earliest filmmakers, agreed to feature soap in their film “Washing Day in Switzerland.” But the rise of streaming has led to an explosion in product placement. Brands are looking for new ways to get eyeballs on their products and productions are looking for creative ways to offset costs. Product placement is now a $23 billion industry, up by an estimated 14 percent since 2020.

“People aren’t paying attention to ads,” said Mike Proulx of the research consultancy Forrester. In a recent survey conducted by the group, only 5 percent of online adults in the United States said they rarely skipped ads; 74 percent said they often did. “It’s the holy grail for a brand to be integrated into the actual content itself.” But product placement, often maligned for its obviousness, has to walk a thin line between showing off the product and fading seamlessly into the background. “It has to be executed in a way that doesn’t feel like an advertisement,” Proulx said.

Agencies like Hollywood Branded connect the brands they represent with scriptwriters, producers, set decorators and prop-masters, who might in turn work them into story lines. (Hollywood Branded even has a warehouse full of discontinued BlackBerry cellphones, handpicked PassionRoses, minimalist eero Wi-Fi routers, and all manner of things they can ship to sets on a moment’s notice.)

“Products are part of our lives, they just are,” said Stacy Jones, Hollywood Branded’s chief executive. “Say you have a Montblanc pen, you automatically think, That character has a pen worth hundreds, if not thousands, of dollars.”

Items can also function as narrative shorthand in scripts. “If you have a female whiskey drinker, you know she’ll be a badass character,” said Erin Schmidt, chief product placement officer at Branded Entertainment Network, another agency that helps to coordinate product placement. “You don’t need to write more script in there because the brand gives you that contextual element.”

The majority of product placement in film and television, Jones said, happens on a quid-pro-quo basis rather than in exchange for payment. A car company might lend an expensive car to a set in exchange for an appearance in the show, or S’well water might mail a case of bottles to propmasters for consideration. (With cars, Schmidt said, there’s often another kind of trade-off: A company might agree to give a certain number that can be destroyed in an action scene, in exchange for being featured in another scene.) There are paid placements, too, but particularly with large streaming companies like Netflix and HBO, it’s more frequently a matter of finagling loan-and-trade agreements to reduce production budgets.

Ruby Moshlak, a self-identified “prop mistress” who manages props on film and television sets, is often working on a tight budget to create a realistic fictional world. “There’s nothing like a $5,000 espresso setup, free of charge,” she said. She described a delicate dance of finding the right object for the right character, like which car Queen Latifah should drive on “The Equalizer.” “The Jaguar crossover SUV really suited the character well,” Moshlak said. “It’s kind of a mom car but still pretty cool, with retail value under $50,000, which is of upper-middle-class but not anything so different than the sedan.” Moshlak was able to get it for free, in exchange for the exposure.

Which is not to say that product placement always goes smoothly. Blatant product placement can both hurt a plotline and strain credibility. “If James Bond were shown drinking only milk, or getting in a Ford Fiesta and not an Aston Martin, viewers would feel that crossed some kind of line,” said June Deery, a professor of media studies at Rensselaer Polytechnic Institute who has studied the commercialization of American media. Also, the constraints associated with specific contracts can be creatively limiting. “Two years ago, I worked on a rom-com with really big actors in it, and it was gross,” Moshlak said. “In every scene, there was an in-place money agreement. There was a kitchen appliance that was in a third of the movie for over $1 million — literally written into the story.”

The success of product placement as a marketing strategy relies on the interplay between the suspended reality onscreen and the free market economy of the offscreen world. It became obvious just how powerful this exchange can be when a character on “And Just Like That” had a heart attack while riding a Peloton — causing the real-life brand’s stock to plunge. On the flip side, the breakfast brand Eggo was reinvigorated when it was featured on the show “Stranger Things” as a key plot point in the series. (After some years of lagging sales, there was reportedly a 14 percent spike after the show’s first season aired.)

Certain items can take on almost talismanic importance, like the BlackBerry that Kevin Spacey’s character used in the Netflix series “House of Cards.” “The BlackBerry was baked in in year one, and then Samsung wanted to take over but he was already established as a character with a BlackBerry,” Jones said. “You can’t always switch it up like that.” And though BlackBerries were supplanted in the popular imagination by iPhones, and ultimately discontinued altogether in 2020, the phone now has a second life in shows like “And Just Like That,” providing a period flair.

While traditional product placement was oriented mostly around objects, less tangible brands are also seeking placements. Zillow, for instance, approached Branded Entertainment Network roughly six years ago about making its way into scripts. “Zillow is really looking to capitalize on life change — marriage, moving, a new job, things like that,” Schmidt said. “So we just go to the creator community and bring that essence to them, and then they’ll come to us and say, ‘I have this great opportunity in which a character is moving to Chicago for a new job, maybe we can bring Zillow in there.’” The site ended up in “Grace and Frankie,” “Never Have I Ever,” “Sweet Magnolias,” “Promising Young Woman,” “Book Club,” and “Clifford the Big Red Dog,” among others — and the agency experimented with different strategies for working it in. Schmidt said that verbal mentions, inserted in the script, worked well for Zillow. “We found really fun ways to integrate it verbally, like, ‘I Zillowed his house and it’s only worth x,” Schmidt said. “Saying ‘I’m going to Zillow that house’ became a part of the cultural norm.”

Tech companies are experimenting with tools to place products into shows that have already been taped and AI solutions that could swap one brand of alcohol for another, or a bottle of Pepsi for what might have originally been a bottle of Coke — essentially selling placements like ad space for different markets. Jones noted that this can be tricky to pull off successfully given that it can be a kind of art to select what belongs onscreen in the first place, almost akin to a casting process for objects.

At an industry conference in May, Amazon announced that it would be experimenting with a beta version of “virtual product placement,” which the company is testing in shows like “Reacher,” “Jack Ryan,” and the “Bosch” franchise. “It creates the ability to film your series without thinking about all that is required with traditional placements during production,” Henrik Bastin, chief executive of Fabel Entertainment and executive producer of “Bosch: Legacy,” said at the conference. “Instead, you can sit with the final cut and see where a product could be seamlessly and naturally integrated into the storytelling.” An exemplary still from “Bosch” shows M&M’s edited into a scene next to an office coffee machine.

Product placement skeptics, particularly those annoyed by obviously staged instances of it, might see it as a cynical way to build a fictional world. “I think the bigger context is that product placement acclimatizes viewers to the inevitability of capitalist exchange,” Deery, the professor, said. “It normalizes the idea that there is a commercial motive behind almost everything we experience in our increasingly mediatized and branded experience.”

But, Deery noted, this is “its own kind of realism” in a world where brands do reign supreme. On the BBC, for instance, and some American network television, brands are blurred out or hidden from the camera — which creates its own kind of uncanny viewing, a world that approximates our own but isn’t quite like it.

“Everything is a brand,” Jones said. “You product place roses, almonds. You can do roofing, shingles.” And, of course, the refrigerator. “Refrigerators are full of real products, and you want that to be realistic,” she added. “Unless it’s full of Tupperware. But Tupperware is a brand, too.”