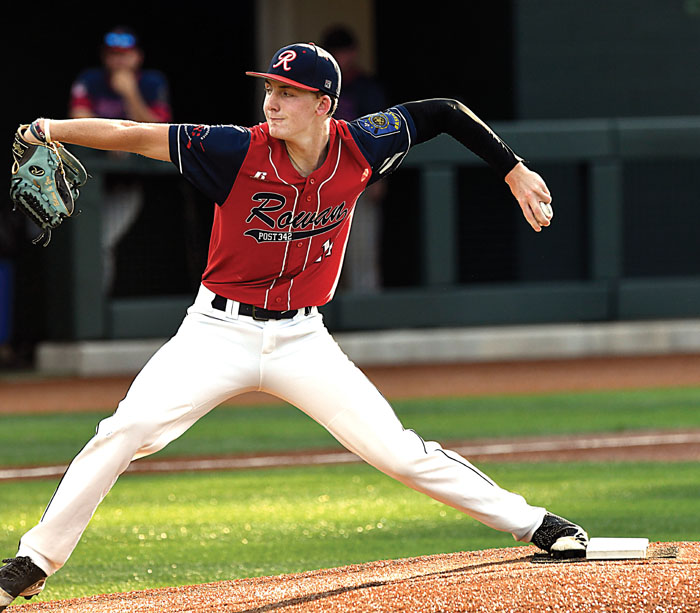 After all, undefeated Casey Gouge was on the mound for Rowan’s opening pool game in the state tournament.

But it turned out to be an agonizing day at Campbell University’s Jim Perry Stadium rather than a thrilling one.

What was nearly a Rowan victory in two hours turned into a loss that took more than four. It was all downhill after a sharp-eyed umpire spotted lightning in the top of the seventh, with Rowan closing in on a 2-1 victory.

No doubt, it was a worse-case scenario day and an exhausting one for Rowan’s pitching staff.

Gouge needed more than 100 pitches to fight his way through five innings. Once he passed the 80-pitch threshold, he knew this was going to be, by rule, his last outing on the mound in this five-day tournament.

Even if Rowan somehow comes back from Tuesday’s loss and advances out of pool play, Gouge’s contributions, which have been pretty incredible this summer, are going to be limited to his bat and his first baseman’s mitt.

Pitt County (21-6) got good work out of four pitchers. Dawson Ables, who began the game at second base, got credit for the win.

It all started well for Rowan.

Gouge allowed three hits in the top of the first, but it was softly hit ground balls finding holes. He got out of it with one run.

In the bottom of the first, Jake Fuller pumped a few 89 mph fastballs, but Cole Johnson doubled and Hill smoked an off-speed mistake over the left-field wall for his third homer of the summer and a 2-1 lead.

Pitt County stranded two in the second and then failed to score against Gouge in the third even after loading the bases with no outs. Gouge got two popups and a strikeout to escape. But he needed 30 pitches to get through that inning. He threw 72 in the first three.

Gouge walked batters in the fourth and fifth but managed to put up two more zeroes.

Rowan couldn’t solve Fuller or Cole Smith, who followed him to the mound. It stayed 2-1 through five.

Second baseman Luke Graham moved to the mound for the sixth, starting a chain of Rowan defensive moves. Rowan opted to put its best defensive outfield in the game, with Elijah Palmer and Jake Blevins flanking Jackson Deal. Graham maintained the lead.

Cole Johnson moved from shortstop to the mound for the seventh to close it. With one out and one on, there was a commotion, and umpires cleared the field for a lightning delay.

Rain followed, as it usually does.

Johnson returned to the mound an hour later. He was greeted by a single to put two men on. A pickoff attempt failed, and the lead runner advanced to third. He scored from there on a sacrifice fly, and it was 2-2. The last out of the inning was really belted, but Deal ran it down near the wall.

Johnson got Pitt County out in the top of the eighth.

Rowan had a great opportunity to win it in the bottom of the inning, when Johnson and Deal came through with base hits to get things started. Aiden Schenck moved both runners with a sacrifice, but with first base open, it was an easy decision for Pitt County to intentionally walk Hill. Rowan had put those defensive upgrades in the outfield with the idea of winning in regulation, but now they ventured to the plate in the No. 5 and No. 6 spots in the lineup, and they weren’t able to get the run home.

Johnson kept it 2-2 in the top of the ninth. He’s normally a one-inning guy when he pitches, but he worked three innings.

Matt Connolly ripped one in the gap with two outs in the bottom of the ninth and hustled to third base, but Johnson couldn’t get him in.

Drew Burton pitched the 10th for Rowan and kept it 2-2, but Rowan again failed to score.

Hagler took the mound for the 11th. The combination of an error, a balk and a walk got him in trouble. Then Watkins unloaded his bomb. There wasn’t much doubt it was leaving the park.

Graham had an infield hit, his third single of the game, but Rowan didn’t seriously threaten in the bottom of the 11th.

So Rowan is 0-1 in pool play. It’s not over, by any means, but the odds are pretty long.

Jake Blevins will pitch for Rowan (35-8) today at 4:30 p.m. against Wilmington. Wilmington won 4-1 on Tuesday against Queen City.

NOTES: Cherryville beat Hope Mills 6-4. The Randolph County-Fuquay-Varina game started very late, as the length of the Rowan game threw off the schedule for the evening games.