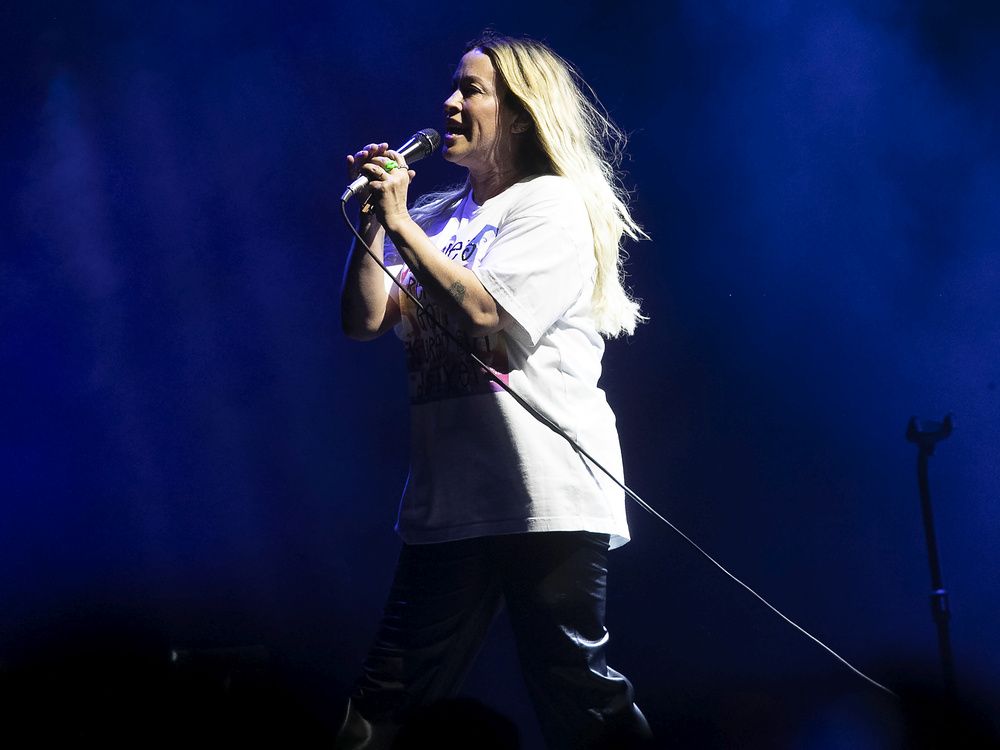 When and where: July 31 at Vancouver’s Rogers Arena

Ah, the ’90s; the melodrama, the anger, the whinging, the grunge.

Sunday night’s Alanis Morissette concert was part of a postponed 2020 tour celebrating the 25th anniversary of Jagged Little Pill, the groundbreaking 1995 album that made the Ottawa-born-and-raised singer a global superstar at the age of 21. It sold 33 million copies.

Morissette and her five-piece band played the album in its entirety, out of order and interspersed with material from her seventh studio album, Such Pretty Forks in the Road. The newer songs, like Reasons I Drink, Smiling, and Ablaze, were dramatic alongside the oversized and unmissable pop hooks of the older if more visceral and immediate material.

The night was really about revisiting the 25-year-old-plus album, though, partly out of nostalgia, partly to see how far we, and Morissette, have come. A video montage of Alanis through the ages, including snippets of interviews and TV appearances and even a clip of schizophrenic Chicago musician Wesley Willis singing his tribute to the singer preceded her arrival.

All I Really Want, Jagged Little Pill’s statement of intent, opened the show. Stalking the stage in an oversized T-shirt and tight black leggings, Morissette got in her steps as she stalked the stage from one corner to the other.

Wielding her mic with precision, drawing it nearer or further from her tremendous voice, she squeezed every ounce of emotion possible from the slacker anthem Hand in My Pocket, the defiant You Learn, and the tough-love lesson Not the Doctor.

Audience members, some decked out in their Pride regalia from earlier in the day, stood on their feet throughout the 90-minute-plus set, cheering and dancing. The biggest responses were the shout/singalongs during Ironic and the set-ending You Oughta Know, the song that cemented her standing as spokesperson for the tossed-aside.

For an encore, she and the band vamped their way through Your House, Pill’s “hidden track” before going full Pearl Jam on Uninvited.

While the band pounded through a grunge-y instrumental break, Morissette tossed her trademark lengthy brown tresses like Eddie Vedder in a windstorm.

Thank U, a single from her follow-up to Jagged Little Pill, sent this reviewer home feeling grateful for having seen a phenomenal performer in an arena-rock show for the first time in years, with attendant big lights, big sound, interesting audience fashion choices, and extortionate T-shirt prices. I bought a keychain.

Just as exciting and even more ’90s, Garbage opened the show with a glorious barrage of proto-grunge/industrial noise-rock that has lost none of its allure. Shirley Manson led the four-piece band, featuring the same lineup that recorded the band’s hit self-titled debut, released two months after Jagged Little Pill.

Much of the set consisted of songs from the record and its follow-up, Version 2.0, including Stupid Girl, Special, I Think I’m Paranoid, and Only Happy When It Rains. Songs from 2021’s No Gods No Masters also made a showing, including the single Wolves. Manson and the boys ended their time onstage with a partial cover of Fleetwood Mac’s Dreams that was haunting enough to send a chill down Stevie Nicks’ spine.

More news, fewer ads: Our in-depth journalism is possible thanks to the support of our subscribers. For just $3.50 per week, you can get unlimited, ad-lite access to The Vancouver Sun, The Province, National Post and 13 other Canadian news sites. Support us by subscribing today: The Vancouver Sun | The Province.