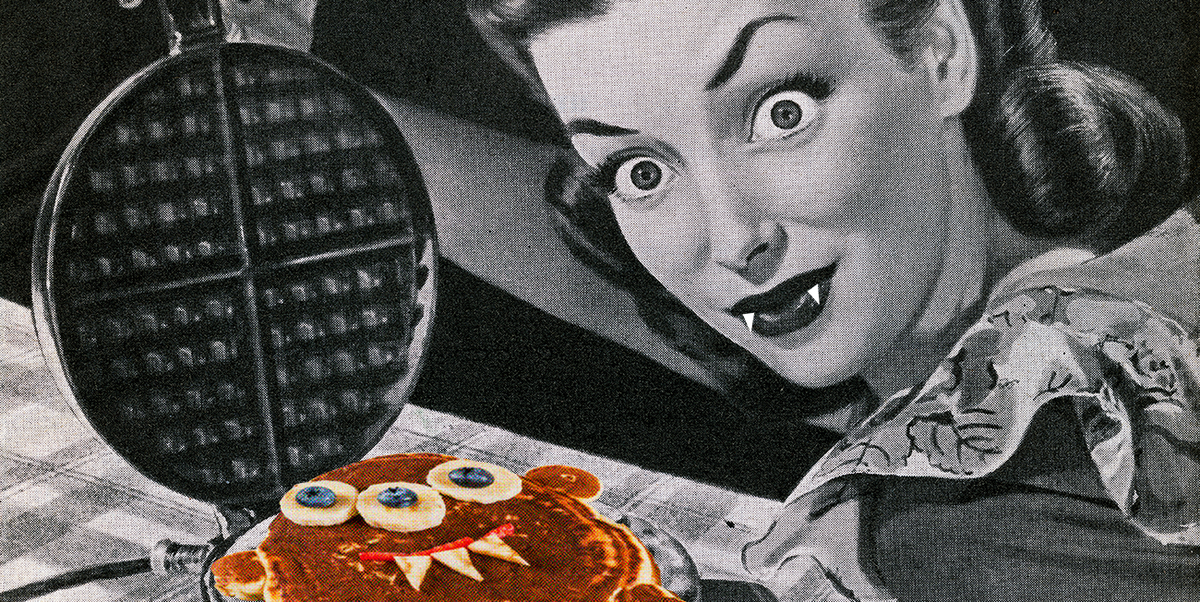 Ah, October 31st. Maybe you’re on your tenth Hocus Pocus rewatch, but that doesn’t mean you’ll ever get tired of getting in the Halloween spirit. It’s such a vibe: All the storefronts are dripping in cobwebs, you’re considering taking scissors to a childhood costume to make it ~new again~, and you’ve studied approximately 17 full-length Halloween makeup tutorials to perfect your lewk for Halloween night.

If you’re hosting (or attending) a scary soiree this year, you can’t just put out any old chips and dip—no, it has to be a full-on enchilada dip graveyard. Your brie has gotta be skeletal, and your pizza has gotta be ghoulish. We’ve got ya covered with all these on-theme, super easy, and delicious Halloween snack ideas. To pull these off, you may wanna hit up your local craft store for some festive cookie cutters (and some food coloring), just FYI. Oh, and it wouldn’t be a bad idea to stock up on tequila for the witches brew you’re about to stir up.

Now light a cinnamon-scented candle and prepare thyself to get pumpkin *spicy* with these Halloween party snacks (and cocktails, obv, we wouldn’t skip those).

Look out, Starbs. This pumpkin pie dip is better than your go-to PSL. This rich, indulgent spread takes only seconds: Beat cream cheese and confectioners’ sugar until smooth. Whisk in pumpkin, sour cream and spices until blended. Transfer to a bowl; serve with gingersnaps. Refrigerate leftovers (which you prob won’t have).

Always a crowd-pleaser (but not always your friend the next morning), these vodka and rum-infused candy corn jello shots are ultra-festive. Just a tip though: You need about an hour and a half for each layer to set, so don’t think you can start filling these up as your guests are arriving. It’s more of an All Hallows Eve activity.

Emphasis on the quick here. If your guests are in the Uber and you still have to, um, decorate your entire place, these caramel apple fudge squares are super simple. Basically you just dump together the ingredients, including apple, caramel, and white chocolate chips, and microwave them. This recipe’s extra fall-ish and makes a batch of 36 pieces, so you’re covered even if you end up with post-party crashers.

Recipe from The Pioneer Woman

Add in some fake fangs and voila! You’ve got instant creepy (yet savory) critters to jazz up any party platter. They’re almost too cute to eat. (Almost.)

An enchilada graveyard…what more does a gal need? Bury me in this.

And don’t forget to fold in the cheese (that one’s for you, Schitts Creek fans) and let it get nice and bubbly to get the best, most IG story-worthy cheese pull when you dip.

Um, deviled eggs. Need we say more? Adding in some eerie eyeball imagery is exactly what you need to make this dish even scarier. Use olives or edible eyeball candies for eyes and apply red food coloring with a toothpick to trace the “veins” throughout the egg.

These savory crispers are scary good, flipping the script on the usual cinnamon-y spice you get with your pumpkin goodies. So they’re kinda like tater tots, but pumpkin, and that chipotle cheddar adds a little kick. Fair warning: These might not make it all the way to the actual party.

These boo-ti-ful ghosts are more treat than trick, and they’re so un-complicated to make! Grab some strawberries, white chocolate, mini chocolate chips, and a Ziploc bag, and clear out some space in the fridge.

This recipe is so easy, a zombie could make it (aka you, hungover from bottomless brunch). Pick out your favorite popcorn, sprinkle some matcha over the top, and shake until coated. And there ya go, a Frankenstein-esque vibe to add to your snack spread!

Recipe from Oh, How Civilized

Add some puff pastry to some good ol’ store-bought brie and you’re set. Start by preheating your oven to 400 degrees. Sprinkle some flour onto a work surface like your kitchen counter and roll out puff pastry. Whisk together egg and milk to brush over pastry. Bake until the brie is gooey and the pastry’s golden (approx. 20 minutes) and add pepperoni or olives for eyes.

Ssssomething smells deliciousssss. These reptilian snacks are clutch, whether you’re showing up to a spooky dinner party or having them leftover from the shindig with your third bowl of spaghetti this week. Use olives and dried chile for the eyes and tongue, and sprinkle on some poppyseeds for texture.

Been to an orchard lately (pics with your S.O. or it didn’t happen)? Indulge your autumnal fantasies with this practically effortless dip. Actually though, it’s not often you get to pair your apples with Snickers and liquid caramel, so don’t sleep on this app opportunity.

Keep it seasonal and v sophisticated with a pumpkin and pesto crostini! Where’s the horror, you ask?! You’ll know it when you see an empty plate in five minutes…

This witch’s brew is deceptively simple: lemon juice, activated charcoal, and maple syrup. Whisk all together well then dilute with water to taste. It won’t be a gritty or chalky texture at all, and just delivers a *chilling* black hue. Bonus points for being literally chilled.

Add a little scare to your meal prep with these shrunken potato heads. Preheat your oven to 400 degrees and carve mini faces in the skins. Toss with oil and place on a baking sheet to bake for 40-45 minutes. Serve with the works: guac, bacon, sour cream, and, nevermind…just put together a whole baked potato bar while you’re at it.

Recipe from A Few Shortcuts

Say hello to the *adult* apple juice you should be drinking this October. This spiced fall cocktail is the comforting, boozy drink of your dreams.

Recipe from How Sweet Eats

Life hack: Adding the honey to the pudding mixture gives each pop a *pop* of candy corn flavor that makes it taste like the real thing. We also would not be mad at all if you added some whipped cream vodka to spike these bbs 😈.

Oh, Harry Potter is on again? Brb, cuddled up under our fave weighted throw with a glass of this for all the witchy vibes during Halloween movie night.

Cake pops? Immediate hit. You can get crafty with the design too, to create spiders, jack-o’-lanterns, mummies, or some classy glittery black and orange pops. You could even con your roommates into making it a decorating party before the party, while you simultaneously whip up the jello shots from above.

Can we once and for all admit that Bloody Marys are nighttime drinks? Embrace your inner vamp by sucking down this classic bev.

Recipe from Fork In The Kitchen

Crisp up these gluten-free, paleo-friendly, vegan-friendly delights with a cookie cutter and some olive oil spray. Make ‘em crunchy or thicc and more pita-like to go with any of the dips on this list.

Recipe from One Lovely Life

That swirl, though…mesmerizing. Yes, you will devour these pumpkin and cheesecake-fused blondies, and yes, you will make them again for Friendsgiving.

If you’re gonna be partying all day on October 31st, kick the morning off by putting your Bloody Mary into easy syringe shots. As a bonus, this recipe’s super painless (!) to batch for lots of guests.

With refried beans, guac, salsa, cheese, and a “web” of piped sour cream, this spicy and spooky recipe will haunt all your guests’ dreams (but, like, in a good way).

Now this is the kind of ghosted you want to happen to you. Save this phantom-filled pizza for your Halloweekend Sunday Scaries, or serve it up to your guests as a midnight snacks to soak up all the boo-ze.

Speaking of midnight, who else wants to whip up a marg and dance around the kitchen? Practical Magic is the blueprint, and we’ll take any excuse to bust out the tequila during the witching hour (or any time, really).

Recipe from Two Crumbs Up

I meannn, you probably don’t have any leftover candy hanging around, but if you don’t typically get trick-or-treaters to your studio apartment, put those treats to even better use. We present to you: leftover candy cookies. You can pack them with caramel and Reese’s like in the photo, but Snickers, Milky Way, and fun size Hershey bars are all fair game.

These white chocolate dipped pretzels instantly become ghosts with candy eyes and some creativity. Better yet? They only use three ingredients so they’re easy as hell to throw together.

This crisp, tart poison apple cocktail is the most frightening shade of green. Serve in a witch’s cauldron with dry ice if you dare, or in test tubes to mimic a mad scientist’s lab experiment. Bonus points if you rim your glasses with some apple green sugar.

Recipe from The Seaside Baker