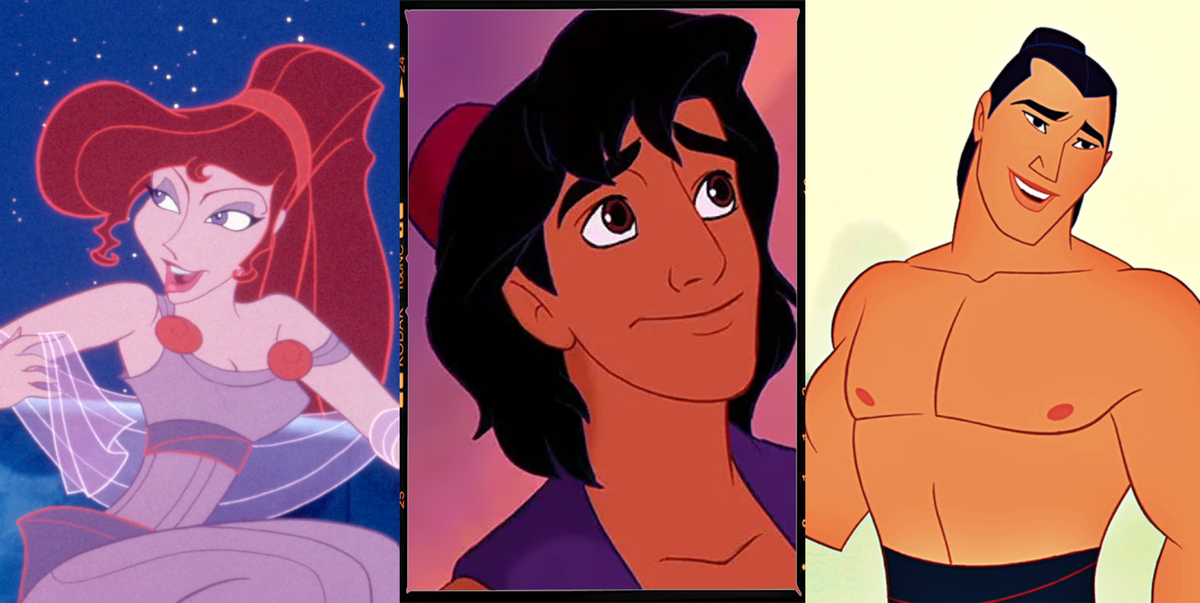 Do you ever think about how some of your favorite childhood cartoons are actually pretty hot? If you answered no, you’re lying. We all have. Sure, it might sound creepy at first, but once you start thinking about it, you’ll realize that deep in your brain you’ve been harboring crushes on animations for years. Kronk from The Emperor’s New Groove? Hot. Frozone from The Incredibles? Straight fuay. Here are a bunch of characters that are so steamy, you’ll be inspired to drive straight to your parents’ house and rip through your old VHS collection.

Aladdin is honestly the total package. He has perfect hair, is definitely cut (hi, pecs), and can pick you up on a GD magic carpet. There’s really nothing to debate here.

Remember when Shrek became a human for a quick sec in the second movie? Of course you do, because you’re still kind of surprised by how attractive he was.

Meg is potentially the hottest character in movie history, animated or live-action. She’s basically a Disney princess but with Big Dick Energy. Not to mention, she’s hilariously sarcastic and has better one-liners than every Real Housewife combined.

Kronk From ‘The Emperor’s New Groove’

If you watched The Emperor’s New Groove early in life, Kronk is likely the reason you are still single. Nobody could ever compare to this hunk IRL. He’s got the jawline, hair, and muscles of a god plus the kindness of a volunteer librarian. The only dude hotter than Kronk is Devil Kronk. He has obviously never missed a leg day.

A bajillion traditionally hot guys have played the role of Robin Hood throughout history, but the version that turns you into the actual heart-eyes emoji is the animated fox from Robin Hood. He’s dangerously charismatic.

David Kawena From ‘Lilo and Stitch’

David (Lilo’s sister Nani’s boyfriend) is Hollister-bag hot, and that’s that on that.

Charlie From ‘All Dogs Go to Heaven’

You can’t tell me that Charlie does not resemble an animated canine version of Jon Hamm. Plus he owned a casino, so you know he’s loaded.

Dean McCoppin From ‘The Iron Giant’

Ray-Ban Wayfarers inside and a black turtleneck? I see you, Dean from The Iron Giant. He looks like a smarter, artsier version of Joey from Friends, which is basically as daddy as it gets.

Frozone From ‘The Incredibles’

Speaking of animated men who can rock a turtleneck…let’s take a moment to appreciate Frozone and his sexy-ass pastel sweater. I would never hide your super suit, bb.

Debbie was an edgy Instagram model before social media was even invented. TBH, we kinda want a reboot of The Wild Thornberrys just so we could see her blossom into a travel influencer.

Scar From ‘The Lion King’

Villains are hotter than good guys, and Scar is proof. Yeah, he framed his baby nephew for murder, but his bad-boy vibes are strong.

While we’re talking about ridiculously good-looking villains, we’ve got to give some credit to Shego from Kim Possible. She is a certified baddie who can rock a dark lip like no other.

Prince Charming From ‘Shrek the Third’

So you’ll drool over Jaime Lannister from Game of Thrones but refuse to admit Prince Charming is a stud because he’s a cartoon? Whatever. Have fun pretending these ’90s boy band locks aren’t literal perfection.

I mean…who wouldn’t want to get “down to business” with Li Shang?!

Prince Eric From ‘The Little Mermaid’

Prince Eric is so stupidly sexy that I almost don’t want to include him on this list because you can just tell that he knows it. That dimple and those piercing blue eyes scream “I make kissy faces at myself in the mirror,” and honestly I’m mad that it works.

Larry the Lobster From ‘SpongeBob SquarePants’

Wouldn’t you love for Larry the Lobster to save you Baywatch-style at the beach? His rock-hard crustacean shell is so legit.

I’m going to go out on a limb (tree pun intended) and assume that Tarzan has some gnarly-ass feet. But if you can look past that, he’s shredded and has a lot of survival skills.

Elastigirl From ‘The Incredibles’

Is an empath ✅ Loves animals ✅ Is voiced by Jonathan Groff ✅ Need we say more?

Jasmine HAS to be a fire sign, right? I mean, the girl has got seriously amazing comebacks, a penchant for adventure, and impeccable leadership skills. A 10/10 certified hottie for sure.

What can we say? Being smart is sexy, and Milo was kiiiind of the blueprint. I mean hello, he was a linguist *and* a cartography expert. Need we say more?

Belle From ‘Beauty and the Beast’

Speaking of smart, our girl Belle has been carrying the weight of intellectual girlies since 1991. Plus, her voice is *chef’s kiss* and her empathy makes us all swoon a little, doesn’t it?

Max Goof From ‘A Goofy Movie’

Not to be outdone by his uber-famous dad, Max Goof has talent of his own (aaaand killer looks to boot). The hair! The cool ‘fits! The glasses! It’s no wonder there are legit Reddit threads dedicated to his hotness. Do we occasionally participate? Not no…

Mulan is the ultimate hottie because, well, she saved all of China. Also, yes, we’re gonna say it: she also looks hot while cosplaying as a guy. Whatever, you were also thinking it.

Let’s take a moment of silence for Jim Hawkins, whose undercut and earring combo is on every current It Guy’s moodboard (we’re looking at you, Timothée). Talk about iconic.